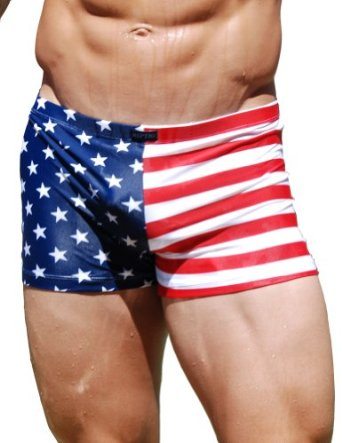 Flagvertising: Is it Unamerican or simply Unimaginative?

Brands embrace pretty much anything that will get them a few extra seconds of press coverage or a point of differentiation on the shelves, so it’s no surprise that so many are wrapping themselves in the flag this election-year summer.

Let’s start with using the flag itself as clothing. According to the non-binding but nevertheless official United States Flag Code, the answer is an unequivocal “no.” As in:

“The flag should never be used for advertising purposes in any manner whatsoever.”

“The flag should never be used as a receptacle for receiving, holding, carrying, or delivering anything.”

So the stars and stripes, basically, are supposed to be off limits. This doesn’t stop anyone, since freedom of expression in the U.S. is held in higher regard than respect for its primary symbol. I’m a huge fan of freedom of expression – but I’m also someone who feels that just because you CAN, doesn’t mean you SHOULD. I’m talking to you, Under Armour.

I expect small-time, “patriotic” companies to slap the flag on things like t-shirts and hats, but I want to be able to expect more from established brands. And speaking of flagship brands, Budweiser shows that it’s possible to capitalize on patriotic fever without actually using the flag. Instead, they’ve just renamed their flagship product “America.”

I suppose we should not be surprised to see our name being used to sell a mass-produced alcoholic beverage. However, as I write this, it’s the anniversary of D-Day, and I’m pretty sure that’s not what our boys were storming the beaches for.

Still, at the end of the day, it’s kind of a fun thing and I can see the appeal for Budweiser lovers. Bud always waves the flag and they seem to do it in a relatively non-cynical way. In this case, the brand went all out. They’ve got excerpts from “This Land is Your Land”, “The Star Spangled Banner,” the Pledge of Allegiance, and even the line “E Pluribus Unum.”

A phrase the founders of this republic once chose as our national motto. Not a bad thing to remember during a year like this. Even if it takes a shameless bit of pandering to do it.