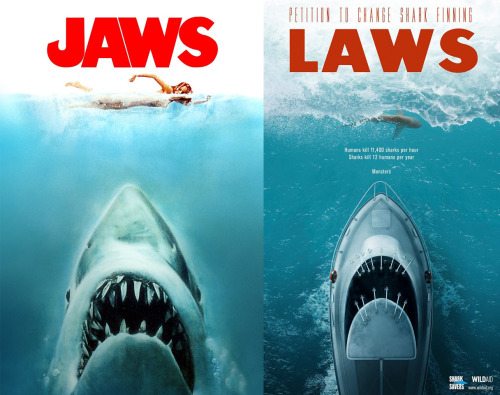 Sharks have a bad reputation. Do they need some new branding? First, a little backstory…

Founded in 2007 by divers, Shark Savers is an organization dedicated to saving sharks and mantas through awareness, education, and action. Each year millions of sharks are caught and “finned” for shark fin soup. Considered a delicacy in the Far East, this soup is made up of a simple broth and actual shark fins. The inhumane practice of cutting off the animals’ fins has caused a major decline in the world’s shark population – as well as detrimental effects on the oceanic environment.

It seems like new branding for these beautiful creatures is in order… and that’s the purpose of LAWS, the latest ad campaign from Shark Savers. Petitioning to change the shark finning laws, this is a great example of movies and marketing coming together for a bigger purpose.

Since the release of the blockbuster JAWS in 1975, sharks haven’t had the greatest reputation. They’ve often been betrayed as “monsters” and “man-eating machines” – when, in reality, it’s the human species that are the real killers of these important creatures. The LAWS ad mirrors the iconic movie poster, with some key branding changes. Swapping out the menacing great white shark for an aerial view of the finning boat, and the naked, hapless swimmer for a shark, as well as adding some stats, the messaging and the numbers are clear: it’s the shark that has to be worried, not the human.

Ads can do more than simply selling goods – they can sell “good.” And, hopefully, they can help change the world. To learn more about shark savers check out the link here:http://www.sharksavers.org/en/home/ You may find yourself looking at the shark brand in a whole new way.