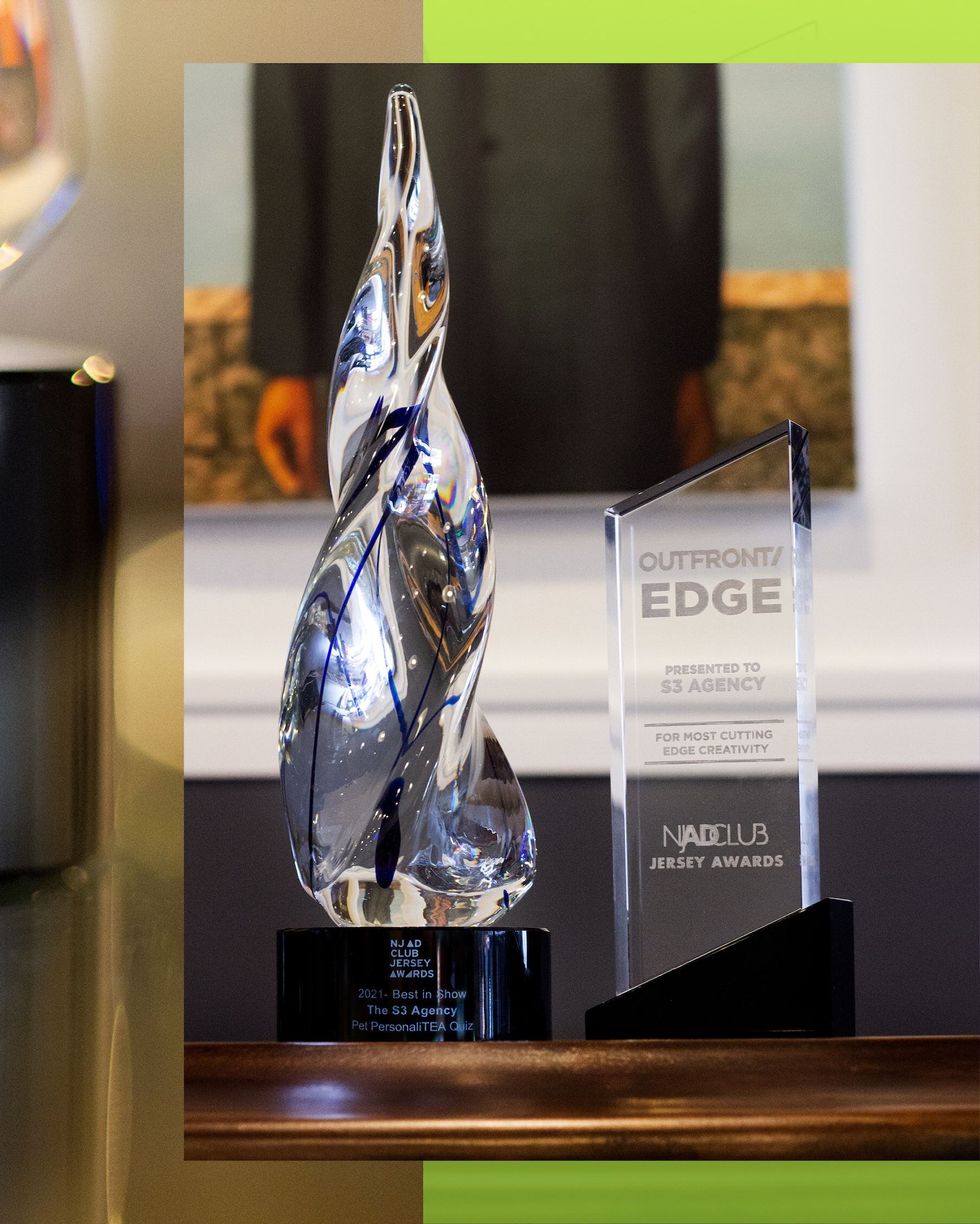 At the 54th annual “Jersey Awards,” S3 took the highest honor for their Tetley Tea campaign

S3 also received the other highest level of recognition during the awards ceremony: the “EDGE Award” from OUTFRONT Media, one of the Jersey Award’s major sponsors. As per OUTFRONT, the EDGE Award is “awarded to the company whose overall work has been deemed the most creative and innovative.”

“We are equal parts thrilled and grateful to have received both of these amazing awards from the NJ Ad Club and OUTFRONT, especially given the high caliber of work we saw on display from our fellow entrants,” said Denise Blasevick, CEO and Co-Founder of The S3 Agency. “As a brand-first digital agency, S3 is committed to creating campaigns that differentiate and amplify our clients’ brands at every engagement point. Having our approach recognized like this by our industry is incredibly meaningful to our incredible team.”

The Tetley Tea “Pet PersonaliTEA” campaign was designed to build targeted U.S. awareness around the English tea brand’s new line of British Blends. Drawing on insights connecting pet ownership and tea drinking affinities, S3’s campaign focused on the tea packaging’s distinguished animal characters – with a cheeky digital/social campaign that invited tea drinkers to discover their pet’s “personaliTEA.” After answering some very “Britishy” questions on behalf of their fur babies, consumers received a recommendation of one of the four new tea blends – along with a coupon good towards their next e-com purchase. The highly engaging campaign exceeded all key performance indicators, including goals for participation and email database growth.

“Tetley’s Pet PersonaliTEA campaign was a clever approach, brilliantly executed by The S3 Agency as a way to bring our distinctive British Blend characters to life – by simultaneously educating consumers about our new range of premium teas while celebrating their pets’ unique personas,” said Sneha Balasubramaniam, Head of Marketing and Innovation at Tata Consumer Products, where Tetley Tea represents one of many fine portfolio brands. “Our core shopper engagement was high throughout the entire campaign, and we enjoyed bringing some fun back to the black tea category.”

In addition to the “Best of Show” and “Creative EDGE” awards, The S3 Agency also took home “Best of Public Relations,” “Best of Social Media,” and multiple First Place and Second Place trophies for their work on behalf of a wide range of clients.